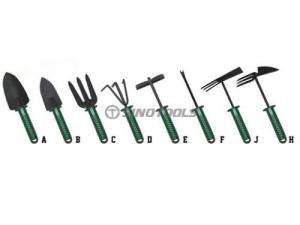 The emergence and development of garden tools began to develop gradually from lawn maintenance machinery. At first people mowed and maintained the lawn with some simple tools and using livestock to "cut" until the invention of the world's first internal combustion engine-powered forage harvester in 1830, and in 1832 for mowing grass. Since then, equipment for greening and conservation of garden projects for different purposes has continued to develop. In the 1950s, a large number of machinery and equipment for landscaping and maintenance operations came out, and the garden tool industry entered a period of rapid development. In the 1970s, in some developed countries in Europe and the United States, as people's living standards improved, small landscaping And maintenance machinery entered the home and became a must-have for the family; at the end of the 20th century, the construction and maintenance of public green space to courtyard green space in most cities around the world has basically achieved mechanization.

After entering the 21st century, with the development of economy and the increase of people's requirements for living and working environment, the demand for garden tools has become stronger and stronger. The garden tool industry is relatively mature in developed countries, of which Europe and the United States are the main regions for the consumption of garden tools. Garden tools have developed rapidly in developing countries, mainly in Asia and South America.

The development of Chinese garden tools and equipment started in the late 1970s. At first, the city construction department set up a garden tool factory to produce garden tools. By the 1980s, with the increase in the area of garden greening in major and medium cities across the country, some agricultural and forestry machinery manufacturing enterprises began to develop and produce some garden tools that were urgently needed by the society. However, these tools are converted from the original products. Although they can also meet the requirements for use, they have a large gap with similar foreign products in terms of noise, exhaust emissions, overall performance and quality, so they cannot enter the garden. The mainstream market for tool applications.

With the rapid development of China's garden greening industry, garden tools have been imported from developed foreign countries since the end of the 1980s, and various types of garden tool products such as Komatsu Japan, Omar Italy, Husqvarna Sweden, STIHL Germany and other brands Introduce the Chinese market. China garden tools manufacturer has also begun to enter the industry from a high starting point. Since the late 1990s, as the world's manufacturing industry has turned to China, some international brand garden tools and small power producers are optimistic about China's low manufacturing costs and other advantages, and have established wholly-owned and joint ventures in China. At the same time, some domestic companies have begun to turn their attention to garden tools. On the one hand, with the technical strength of universities and research institutes, they have quickly improved the quality and production level of garden tool products and entered the most representative of the international market It is Shandong Huasheng Zhongtian and Jiangsu Wode Group; on the other hand, there are also some enterprises that have opened up a shortcut for the independent brand garden tool products to enter the international market through OEM production and map processing development.

We are China Tools Supplier. If you have any requirements for our products, please feel free to contact us.

Thank you! Your message has been sent to the following suppliers.